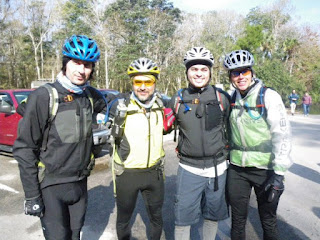 Washington DC had never seen so much snow as in early February of 2010. Being forced to train inside, I only could wish for sunny and mild weather. I never imagined that my wish would come true until I received a phone call that the team Calleva needed a female racer because their female racer was stuck in snow. Without hesitation I got ready and 30 minutes later I was heading towards Tampa, Florida for the 30 hours adventure race: Swamp Stomp. The race consisted of a paddle prologue, three bike sections, two foot sections and a final paddle section.And yes, the name of the race tells the story. The second bike section which was about 12 hours into the race and in the dark gave the race’s name all its proud.

During the night, we entered a remote park. Not only the signs with “Do not enter, you will get shot” but electrical fences and swamps left and right with unfamiliar animal noises made this section an adrenalin-heightening experience. The most epic part of the race was an hour or more (I lost the sense of time) of wading through knee-deep swamps….with bike. My inherited ineptitude for balance as well as my unsteadiness caused by seven Red Bulls (the race was sponsored by Red Bull which meant free drinks at the Transition Areas) made my graceless fall into the swamp inevitable. However, the thought of being stuck in the snowy DC made me appreciate the wet, cold and dirty conditions of Florida.Although we finished unranked due to the loss of our intern, it was an invaluable experience. Before this race, all my teammates have been American. It is a new and fun experience to race with Russians. I recommend the adventure!