Walterboro Race Report: I was never so happy…

… in my one year cycling career to have finished a race. Yesterday sucked so I didn’t even bother to write a report. But today was different. What an incredible feeling not to wait on the finish line to watch the final sprint but actually be somewhere behind that…Awesome!

The course was 9/10 mi long. We had to race 25 laps, 48 starters. It was a flat course with two long straights and one tight leg and one leg with three shallow corners.

I had a hard time to motivate myself for the race. Lindsay and I both were tired. We couldn’t wake up for some reason. However, we managed to get a good starting position. She was second row, I started third row. The race began and I really tried to stay somewhere mid-field and learned fast that the outside line is the line to take. I barely had to break or accelerate. In the past three races, the repeated acceleration blew me up but this time I was able to go through the corners with speed.

So the laps went on and I felt great. Lindsay came up and said to me: Good job, Monika! That was great motivation! When I heard that the next lap was mid-race prime, I was stoked that I managed to be in the race half way. I felt really good so at some point I was actually playing with the idea to go for a prime and call it a day but my inner-self shut me up very quickly and made it clear that finishing a race would be the goal of the day.

Then 5 laps to go was announced and my thought was (since I still believed I wouldnt finish the race): awesome, at least I dont have to wait too long at the side line for the race to finish….I am sharing this here just so you can get an idea how bummed out I have been in the past several days about not being able to finish a race.

In the very same lap a girl crashed right next to me and I just hoped she wouldn’t slide towards me and take me out 4 laps before my first NRC race finish! Also, I was worried about Lindsay because I knew she was behind me and I didn’t see her for the next 10 seconds. Suddenly a rumbling noise approached from the back and I knew Lindsay didn’t crash. Her bike made some worrisome noises throughout the entire race. Later on, we learned that her front derailleur was banging against her crank arm.

Finally, the final lap and I felt great. For some reason, I didn’t even come close to my energy usage from yesterday.

I was able to come around some riders in the last two corners and sprinted to the finish- 28th place! Very happy about that! 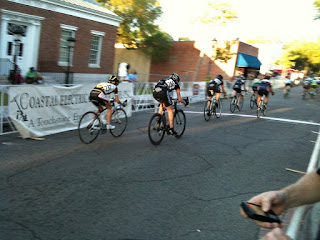 Getting dropped was no option today