Tour of Washington County – my vendetta…now even more!

Posted 20. June 2011 By Monika Sattler
When I raced the TOWC criterium last year and got dropped after two laps and pulled after six laps, I promised myself that this would never happen again! So I was in high spirits for this very last stage of the Tour of Washington County.

The weekend started with an uneventful crash during the Twilight crit on Friday. I ended up fourth in a field sprint.

Friday night crit: This also could have been a Volleyball exercise from my college years Saturday was more promising when I raced the 4 mile hilly prolog to second place, only nine seconds away from first. The road race a couple of hours later was definitely not easy. Two girls got away and when they got too far away from the field, two other girls and I decided we need to pull them in and we caught them with half a lap (3mi) to go. I messed up my shifting on the uphill sprint to the finish, and ended up in fourth place. Sorry, no creative excuses this time. This was a lame way to lose.

After the road race, I was in second place in the GC standing. I was very excited for the 19km TT because it would be the first time I would use aerobars. It was an out and back course and I caught my 30 second girl at the half way point. We passed each other couple of times but eventually I was able to ride away from her and it was great motivation to go faster because I didn’t want to get passed again.

I got third in the TT and since Erin, who was the GC leader after the road race on Saturday, chose not to race on Sunday, I became the GC leader with a 16 seconds lead on the 2nd place. …So far so good….

I had to avenge myself anyway from this criterium last year, so if I didn’t mess it up, I would win the Tour. How exciting!!!

The criterium: I was anxious and really did not want to lose. To make sure I really had the overall win, I worked way too much the first half of the race. I got some time bonuses from the quarter and half way sprints. In hindsight, I should have only worried about marking moves by other potential GC contenders.

The decisive move was made from the two girls that were close behind me in the GC ranking and I was unable to react. The girls got farther and farther up the road.

It was up to me to chase them down because no one would work with me in the peloton and I had no teammates. The two girls in the break had four or five teammates who wanted to make sure they stayed away. I chased and chased until I blew up. I managed to hang on to the back of the peloton after my best efforts to chase down the escapees and salvaged the final podium spot in the GC competition.

Of course, I am absolutely not happy with what happened. Still, I made it on the podium in third place but, believe me, my vendetta is not fulfilled.

Congratulations to CAWES and ABRT for a great race!
Erin, good luck for the National Championships! 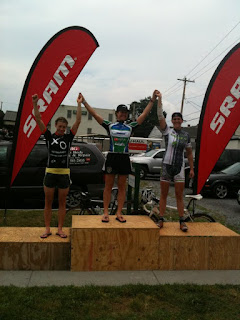