What matters in a TT – Church Creek TT Championship

Today, I wanted to give myself a great birthday present by winning the Championship jersey but apparently the age increase became immediately apparent.

In contrast to last time, I had no excuses.

I did some overwhelmingly un-monika-like preparation for a race. Usually I just show up and hope for the best. This time, I made sure the TT position (although on a road bike) was perfect, I borrowed a disc wheel and a nice front wheel, did even some leg openers at Hains Point the day before. This was the most preparation I ever did for a race. So I felt actually pretty confident that I could do well.

The only concern I had was my starting position…I started first. There was no single soul in front of me. No one! The 15 min break between the categories before ours made sure that I really wouldn’t see anyone. Not even those who flatted or took the wrong turn or bonked. That concerned me. I thrive through competition. I was so concerned that I even made a time sheet I could stare at to keep my motivation up or at least my mind in the race.

So I started the TT and felt already slower than during the last Church Creek earlier this year. The wind condition changed. So I rode and rode and rode and got bored and dazed off and snapped back and rode more and finally….I got passed! Jenn Rasmusson who would win and beat me by impressive four minutes or more came by. And the following thought process shows that I was mentally not in the right state. I was happy! Yes, I finally wasn’t by myself anymore and yes, I am still on the course and didn’t take the wrong turn and finally I could look at someone’s rear…the motivation lasted for about 4 minutes and then she was nowhere to beseen.

Katy Giles passed me too. I don’t even want to mention how many minutes she started behind me but by a lot! The race became a little bit more interesting since finally some people (including the Cat 1/2 guys) were around. One time I thought a car passes me…nope it was a dude with a disc wheel! He was that much faster than me! So time and pain went on and I thought I could at least make the one hour mark but nope (there are no excuses!).

So what did I learn from this experience? I don’t like to start first.

What I also learned it’s not all about equipment! At least not for me! Despite my upgrade of wheels, position, and consequential complacency I achieved a worse time than the last TT on the same course!

Moreover, I am not convinced about the disc wheel. I couldnt hear my own swoosh-swoosh sound! I was so looking forward to sounding fast! But I didn’t hear it!

All in all, I am happy though that I was able to get third, bringing a bronze medal home. 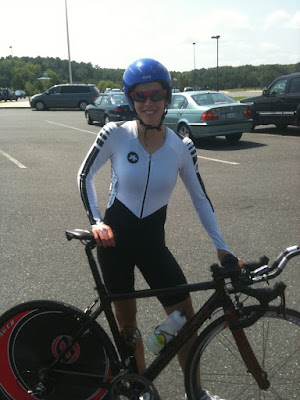