Greetings from Tucson and, oh yeah, Froehliche weihnachten…it’s weird to think of Christmas when you are in the desert.

I have spent the first week in a military training camp. All services were represented spiced up with 11 civilians including one Indian, one French and one German. 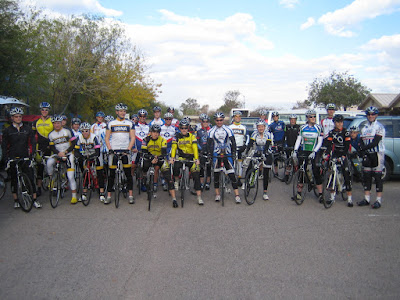 At the first camp day we rode the loop of the notorious shootout – one of the hardest group rides in the country so I heard. It’s a 3% uphill which becomes 4% and then 5% and if you still haven’t realized after 20mi that you are actually going uphill, you will definitely at the hill that suddenly pops up after a slight turn. Brutal! Legs were fried.

Although the first day should have changed my view about climbing, the epiphany came day 2. I came to the camp with the anticipation that the climbs are steep like in Frederick, >10% grade. So I was fooled by the climb of the day – Madera Canyon. When we approached the climb, I was going up this false flat which goes straight forever. I could see miles and miles ahead of me. The team leader said there will be a turn to the right and then the climb starts so I was waiting for the turn but there was no turn. So I asked a fellow rider when the climbs starts and he said “We have been climbing for four miles already.” Oops. Madera Canyon is no joke because the slight uphill becomes gradually steeper and tops out at 9% after 13 miles of climbing.

My understanding of rest days has changed since training camp as well. We rode for three hours, including 7 miles of climbing up Mt. Lemmon. I have to say though, my legs felt great after that!

Kitt Peak is a 13 mi climb to the top. Awesome steady climb. It makes for a great all-around view over the country side. 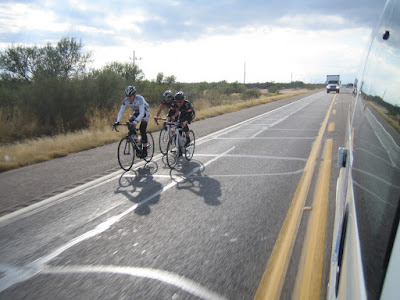 It was supposed to be a 90 mi ride to the mountain, up 26mi to Mt. Lemmon and back. But it was freezing and for safety reasons, it was decided we will only climb the first 13 mi. I love Mt. Lemmon! It’s a great climb. Steady 13mi climb where riders might drop you mile 2, only so you can pass them on mile 7. Patience pays off!

This was my first-ever cycling training camp so the learning curve was steep. Trying to figure out what works best for recovery was key. Having the right stuff in the fridge after the rides is important because after six hours on the bike, everything eatable sounds just great.

Case in point was my attempt to go vegan at the second dinner that lasted exactly until my recovery meal after a long, intense ride the next day. No vegan diet for me.

And then it was Friday and everyone was leaving.

I had to start to make my own riding plans. Well, there was the notorious “shootout” on Saturday – one of the hardest group rides in the country. I could postpone my much needed rest day to Sunday and try it out. So 7:30am and 35 degrees it was and I faced my upcoming pain: riders from Garmin, Real cyclist, Tibco, etc were present. More I don’t have to say. I know now what to expect next Saturday!