After the race last Sunday, I headed north to Darmstadt to see my grandparents. I received a bike map of the area from a friend so I could explore the area I grew up in.

I had somewhat an idea where to go but otherwise just decided to ride wherever it looks best. Right from the start I was surprised by the great network of trails the area had to offer. The condition of the trails were excellent so I could ride as fast or slow as I wanted.
In addition to the bike map, signs displayed riding routes and distances that could be easily followed. The bike map was only necessary if I wanted to know which number a certain route was. I just had to make I don’t ride outside the map.

Following along the countryside in sunny clear weather I came across a sign for a castle – Alsbacher Schloss. I decided to climb up to the castle but apparently followed the way for pedestrians because suddenly I found myself in the middle of a vineyard.
After a while a found the right way up to the castle.

The entrance of the castle was all cobbles. Respect to all racers who are racing on that for miles and miles.

After  the spontaneous sightseeing tour, I followed randomly the bike signs to new direction. After a while I got hungry but no supermarket was in sight. However, I came across a little strawberry stand and bargained with the lady for some strawberries, which were picked just down the street.

The road took me further up a ridge where I had an incredible view over fields, neighboring towns and farms. 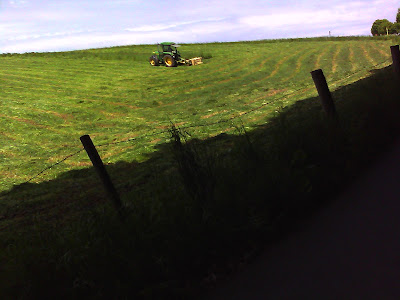 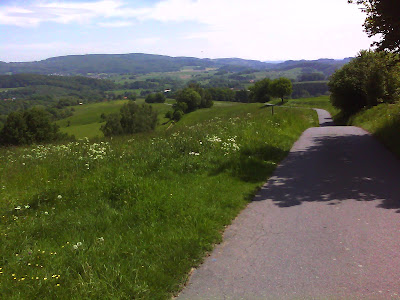 The strawberries didn’t last long so arising hunger made me decide to turn home. I called my grandmother that I am more than ready for lunch and headed home on some dirt and paved roads. Back home, I decided that German cuisine hits the spot as recovery food.