I won the Ski-O race! The What?

And once again, I signed up for the longer version of 11 km. But when I woke up in the morning and checked the temperature which noodled around 5 degrees, it did not take a lot of convincing myself that the shorter 5k race would be just fine for me.
It was sunny but cold. By now, I’ve gotten the hang of how to dress for the Minnesotan winter – just put on every winter apparel you find in your closet! Since it had snowed the day before, everything was covered in white. A great day to spend outside!
Everyone registered and received a bib number and an electronic punching chip (to punch into the control points which are located on every check point as proof you were there). 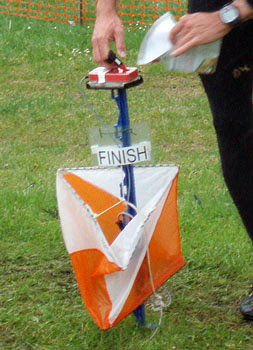 Depending on the race promoter, there are multiple options to prove that you  have been to a check point. For our race, we used electronic punch chips which are worn around a finger. When you arrive at a check point, you stick the punch chip into a control point which records the time of your presence

All the participants, maybe 50 in total, got into a bus and we were driven to the start line. We started on a frozen lake. By now it had warmed up to a balmy 7 degrees. I decided that my warm up jacket would be my racing jacket as well. There was no way I would take any layer off.

“All the racers for the 5k short course to the line! Go!”
Well…. I was still fumbling with my map which was given to us a minute prior. Once I was able to attach the map with a safety pin to a band (not an easy task with two sets of gloves) so that I could wear the map around my neck, off I was.
From my humbling orienteering experience in adventure racing, I had some sort of practice in reading maps.This is how the map looked like:
Here you can see few checkpoints (CPs).  Since there were so many landmarks, a compass was not needed for this race.

The green lines are ski trails. The pink line is the shortest way from one check point to the next, yet that does not mean that it is the most preferable.

For example, from CP 1-201 to 2-202 the pink line would leave over a bridge. Thus, for an orienteering race, you most likely race more than the given distance.

The race went over a few lakes in downtown Minneapolis. It was a great venue.

Since the ski orienteering race was part of a Festival, all kinds of winter activities took place. I skied past an ice rink with speed skaters training, I went through an ice sculpture garden where artists shaped impressive statues out of snow, I passed some skijors warming up for their race, plus I got cheered on by the winter enthusiasts who were not deterred by the temperature.

Oh yeah….and me stumbling passed all of these events with a map around my neck looking lost.

The race finished in a shopping street in the middle of the city; a ski trail had been made specifically for this Festival.
I followed along this ski trail and approached the finish line. I didn’t realize that I was the first finisher overall until the announcer at the finish line said:

“And this must be Ali, the world-ranked ski-orienteering athlete…wait, the bib number does not match. Who is this racer? Let’s find out!”

They asked me who I was and how I was able to beat Ali. While I clarified that I raced less than half the distance of Ali, she was approaching the finish line behind me. (Apparently, my cross-country ski technique must have improved so astronomically that I got confused with a world-class racer!)

Now looking back the race was so enjoyable that I wish
I had done the 11k race. Ski orienteering is so much fun and there are not many (if none at all) ski orienteering races around. A lot of kudos to Peter W. and his team to put on such a unique race in Minneapolis!