Posted 23. July 2013 By Monika Sattler
Five weeks after my crash an epic ride was more than overdue. I also have been given the privilege to ride for Foundry, a Minnesotan bike company with the mission to work hard and ride harder. I was excited to test my new Auger in its natural habitat on gravel roads.
The Muerto Operacion, traversing the Canadian Province of Manitoba, seemed to be great challenge to satisfy my need for adventure – at least 500km through an unknown area on unknown routes with unknown stops.
So basically we had no clue what we would get ourselves into. Lucky us, there was a supporting Manitoban bike community that didnt think it was a good idea to have a German and American cycling aimlessly in their back yard. So they gave us maps and possible water reﬁll stops.
Without them, we would have ended up in a ditch– wait– I ended up in a ditch!
Never mind.
It all started that Lindsay and Ian gave us a ride from Falcon Lake to Virden.
We learned that Tom Horton had bad coffee, that we deﬁnitely should try Poutines and that most of the time the wind comes from the west. Most of the times!
When we got up the next day for this 300mi+ adventure, we learned quickly that this day would be one of the seldom days where the wind comes from the East.
300mi of headwind! Drafting was not allowed.
But, we had 70 degrees sunny weather with clear deep blue skies that made up for our yelling back and forth so we could understand each other.

The ﬁrst 80 miles were on ﬂat, nice smooth gravel. Did i mention ﬂat?

Kansas seems mountainous compared to Manitoba.
Neither of us had a cyclo computer so we didnt have mileage, compass and speed.
We just rode.
Since we were so far north, it was hard to tell what time it was from the position of the sun. We could have looked at the phone but we let ourselves surprise when we stopped the ﬁrst time. It was 12:30 pm when we entered Wawanesa. 6.5 hours of riding. We were hungry and thirsty. We entered the only restaurant in town, owned by a British, ate our ﬁsh and chips and off we went towards Holland.
On our way of town I almost got us disqualiﬁed when I wanted to ride the nicely paved road out of town when Corey stopped me and pointed to his cue sheets.
Ah, right, cue sheets. I forgot already about those.
Four hours later we entered Holland and enjoyed salami rolled chocolate chip cookies on the curb outside the grocery store. While I searched for more fat and sugar in the store Corey got invited to a wedding nearby.
When we got back on the bike, we felt the 130miles in our legs. The next 50 miles would be the most challenging, at least mentally.
It was one road, one direction. Nothing else. Keeping ourselves entertained was key.
We looked behind us. The sun was setting, slowly but visibly. It got colder.
We wanted to reach the bar in Brunkild by sunset. And we did. Barely. We both were physically and mentally exhausted. We needed some entertainment. To our surprise we got more than the expected entertainment.
When we entered the bar, I walked right into a striptease performance.
I turned around 180 degrees ready to leave.
Have we entered the wrong door? Nope. The bar is right behind the naked woman. 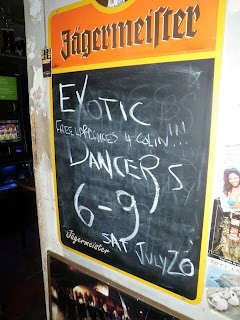 Once having reached the bar safely we ordered burgers, sandwiches and the notorious Poutines, a combination of fries, cheese curds in gravy. Everything tasted great.

The stripper told me we are now the new attraction in town. Two drunk kids came in and ordered jagerbombs for everyone. I played party pooper. Corey played along.
We were thinking of the cold night outside. I was prepared.
Corey not so much.
His new wardrobe included an XL bar T-shirt, 20 newspapers and knee socks cut into thigh and forearm warmers. I say ghetto, he says MacGyver. (In any case, we chose not to take a picture. He might get ostracized by his local community.)
When we left it was in the low 50s. It was 11:30pm. In the next town we were greeted by a barn with full blasting music coming out. It was full house. Half Manitoba was dancing.
We had to stop here because of my need for a nature break. While I was in the woods, a car was charging towards Corey and stopped shortly before him.
Then the car left.
Then the police came up to Corey.
Then it left.
What the heck was I missing?
The car was asking if we needed help. The police was asking what the car was asking.
Interesting investigation!
Leaving town we entered the ﬁrst terrain challenge, mud! I recited my repertoire of German curse words. Despite the shortness of the section I was reminded of this little monster of mud and clay section for the remainder of the ride – I couldnt clip in anymore.
However, it woke me up. It put Corey to sleep. Or maybe it was the jagerbomb which made him sleepy but all of a sudden he became very quiet.
At 3am we came to an intersection where we had a choice of going north following the route or going 2 miles south into the town of Steinbach trying to ﬁnd food and drinks. His MacGyver dress was not holding up to its expectations. He was freezing.
We chose right and looked for food.
Mc Donalds was closed.
Walmart was closed.
What would be open at 3 am on a Sunday? It was Tim Horton. The irony made its circle. The bad coffee tasted wonderful and the Boston creme donuts just delicious. I had two more just for veriﬁcation purposes.
Looking back, this stop was essential because the next section was brutal. Besides that was my turn to get tired. I was swerving, seeing elks in the woods and turbines as houses. At some point Corey asked to stop to put some lotions on some body regions.
When he took care of some business I found the grass to look very comfortable and soft- almost like a pillow.
I had to test it.
I softly hit the ground and was out for the next 5 minutes.
After my little nap I was ready for more adventure. The adventure included new terrain and it didnt get easier: deep sand and creek crossings. The 20miles to the next gas station felt like 60.
The fact that I wasnt able to clip into my shoes didnt make it easier. We ran out of food and water. When we stopped, we became breakfast for the 100 mosquitoes.
We also learned that horse can ﬂy comfortably 25 mph and still can bite you.
In crawling pace we made it to our last stop before the finish line – a gas station. I realized too late that the tap water was undrinkable. With all the mud I ate, that little bit of water contamination wouldnt make any difference. After refueling and some small talk with a Russian we entered the last section of the ride and ﬁnished in 31 hours with 300+ mi of headwind.
This was the second part of our route:

The course, the people and the weather was exceptional! What a great adventure!
Now I got seriously addicted. I am already thinking about the next challenge.