Posted 18. September 2013 By Monika Sattler
The stay in a cabin with ten fellow racers the day before the race (thanks to Charlie and his family) set the perfect atmosphere for a successful gravel race weekend – preparing race food, discussing bike gear and talking race tactics.
Every gravel race is different. With gravel worlds still in mind I was lining up at the start line with two water bottles. With refueling stops at mile 40 and mile 70, two bottles would last – so I thought at least. What I didn’t take into account was the fact that everyone else seemed to have a camel bak, which would mean the chance that someone would refuel at mile 40 would be low.
So I treated this as a physiological experiment how far two bottles would get me.
Within the first ten miles, the three leaders were already ahead of the group. 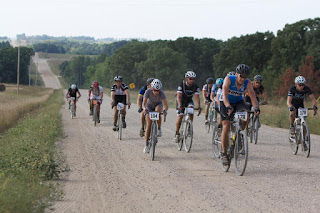 Our chase group of about 15 dabbled along for a while; no one with a strong incline to burn matches.
I was sitting on my chosen wheel while we were passing mile 40 – a gas station and first opportunity to stop for water.
My group chose to continue so did I.
I was already running low on bottle number 2 but I knew mile 70 would be the next stop. Until then, so I hoped, the group would be smaller, which would make it easier to convince everyone to stop for water.
But for now, another 30 miles to go. Half a bottle had to be enough.
It became hotter. Dust stuck to sweat running from face, arms and legs. The gravel was deep asking for a lot of effort for little forward-motion. The sudden change of gravel depth required continuous concentration. Slowly but surely, the energy level of the group started draining.
I kept riding my own pace and at mile 50 I was by myself.
Twenty miles to go. Nothing left in the bottles. I started feeling the effects of dehydration: overheating, headache and hot feet.
Finally at mile 70 I made it to the liquor store to stop for water. Equipped with two bottles, a Gatorade and a snickers bar I was back on the road. That should be enough for the last 30 miles.
I entertained myself with old racing stories and started singing the first line of all five songs I remembered. I tried to solve my biochemistry homework, which gave me headache and caused a drastic slowdown of my riding pace.
So I focused on the race and the potential whereabouts of all other racers. I had no
clue but it gave me enough to think about until mile 93.

I realized all of a sudden that I was VERY tired. “Monika, you are riding a bike, stay focused!” It became harder to hold the grip of the handlebars. My body told me to stop and sleep. I slowed down to seemingly walking pace. The only songs that came into mind were the German and American anthems which kept me upright for the last seven miles. That was a tough race!

Results are here.
Thanks to Deek Surly and the volunteers for a great event and for taking pictures!